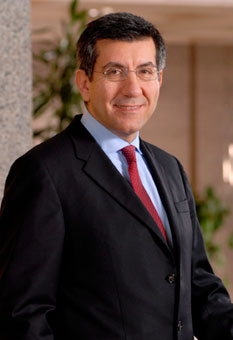 - “AKBANK HAD A VERY SUCCESSFUL YEAR” -

“Akbank continued its sustainable growth while increasing its market share in all major product lines and achieving increasing return on equity.”

- “WE INCREASED OUR GENERATION CAPACITY TARGET IN ENERGY BUSINESS” -

Kurtul continued as follows: “We continued to make solid progress in our energy investments in 2012. We completed Dağpazarı and Bares wind power plants. We also continued to work on the financing for our ongoing projects and completed the financing of Tufanbeyli Thermal Power Plant with a 12-year, 750 million Euro loan.

In December 2012, our partner in Enerjisa, Verbund, has signed a share transfer agreement with E.ON, one of the leading electricity and natural gas companies in the world. Announcing its 2020 growth plans, Enerjisa is targeting to grow regionally and is adding natural gas import and trading to its business lines with its new partner E.ON. We plan to produce 10% of total electricity demand in Turkey and to reach 6 million customers in electricity distribution by increasing Enerjisa’s generation capacity to 8,000 MW by 2020. We will also continue to closely monitor new privatization opportunities in energy while we are reaching our targets.”

-“WE MAINTAIN OUR GROWTH TARGETS IN CEMENT”

Kurtul stated that, despite the negative impact of bad weather conditions in the beginning of 2012 and heavy competition in the sector, Sabancı Holding cement companies performed better than Turkey’s GDP growth, increasing their sales by 6% and maintaining their operating profits.

Kurtul continued as follows: “We have the opportunity to grow in Turkey through both capacity additions and acquisitions. We continued to invest in sustainability in 2012. Waste heat recovery plant in Çimsa Mersin Factory became operational. Additionally, we started to cover more than %20 of some of our plants’ energy needs from waste fuels.”

Kurtul continued his speech as: “Teknosa increased its sales by 40% to 2,300 million TL and increased its net income excluding one-off items by 52% to 50 million TL. Maintaining its strong leadership in the sector, Teknosa started to share its operational success with its investors.

While maintaining its rapid organic growth in the sector, Teknosa will also search for consolidation opportunities that may arise in the future.”

Kurtul stated that Sabancı’s e-commerce operation, kliksa.com became operational in March 2012, offering consumer electronics, books, stationery and office supplies with special offers and different payment options to its customers. Kurtul stated that Kliksa.com has more than 1 million visitors per month and will soon add other product lines to its offering.

Kurtul stated that Aksigorta and Avivasa increased their revenues by 27% and operating profits by 81% in 2012.  Kurtul continued as follows: “Aksigorta implemented successful strategies and increased its operational efficiency, which resulted in higher profits and an increase in equity returns to 12%. Avivasa continued to grow rapidly in 2012 while increasing the funds under management by 37%. Kurtul stated that the legislative changes in the Private Pension system will have positive effects on the number of participants and the size of funds under management, which will pave the way for Aviva’s rapid growth.

-“INTERNATIONAL MARKET CONDITIONS WERE CHALLENGING IN OUR INDUSTRIALS SEGMENT IN 2012“

In our industrials business line, we are looking to invest in high-growth and high equity return businesses in which we can differentiate through R&D, innovation and development of new markets. We sold our shares in Olmuksa to our business partner, International Paper and restructured Temsa Global, in line with its various business lines. We decided to spin off Mitsubishi Automobile Distribution and Komatsu Work Machinery units from the main business of bus production and restructure them as subsidiaries of Temsa Global.”

Kurtul concluded as follows: “We expect the Turkish economy to grow by 3.5-4% in 2013. We will continue to create value for our stakeholders and continue growing faster than Turkey’s GDP growth in 2013 by focusing on competitiveness and efficiency in our existing businesses.

Sabancı Holding stock performed very strongly in 2012. The stock price increased by 85%. We actively manage our portfolio with a net profit and return on equity focus. The contribution of our hydro plants that will become operational in 2013 and 2014, will be more visible in the upcoming years. We expect that capital markets will appreciate our further listings of high growth companies, Avivasa and Enerjisa.

We thank our shareholders, employees, customers and suppliers who contributed to the successful results of Sabancı Holding.”